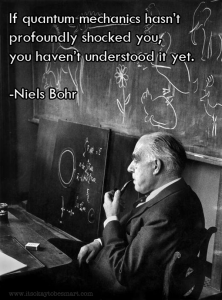 As a man who has devoted his whole life to the most clear headed science, to the study of matter, I can tell you as a result of my research about atoms this much: There is no matter as such. All matter originates and exists only by virtue of a force which brings the particle of an atom to vibration and holds this most minute solar system of the atom together. We must assume behind this force the existence of a conscious and intelligent mind. This mind is the matrix of all matter.
~ Max Planck
.
Explanation:
The universe is the result of the same movement repeating.
(This movement is a bundle of energy called the QUANTUM)
One movement is all there is and within the movement there hides its cause: the cause of the initial movement is the resistance that precedes it - and, because the movement could not happen without this pre-requisite resistance, it is thus reasonable to conclude that the primal resistance not only initiates and precedes its own movement it also remains ‘still’ within the subsequent secondaries that emanate as the result of the movement’s frequency: the world/universe.
The movement (precise quantity of energy/quantum package of energy) is rooted in eternity and no matter its frequency each repeat is the same – each repeat is the beginning of time.
Thinking drives the frequency that produces the universe and as frequency increases so follows resistance. Our purpose is to use thinking to gain the information necessary to release resistance - we go out to gather back and until we finally come to realize that the primal resistance is a ‘conscious and intelligent mind’ with its own agenda to remain in control, we will continue to be stymied in our efforts to release the resistance that binds our thinking.
.
In all my research I have never come across matter. To me the term matter implies a bundle of energy which is given form by an intelligent spirit.
~ Max Planck.
.
.
Written by Tom Kitt w/ Rod McCormick.

I am from Galway, Ireland. I came to the US in 1971 and raised a family. I have spent the past 12 years in Asia writing on the subject of eternal recurrence.
View all posts by Tom Kitt →
This entry was posted in Uncategorized. Bookmark the permalink.